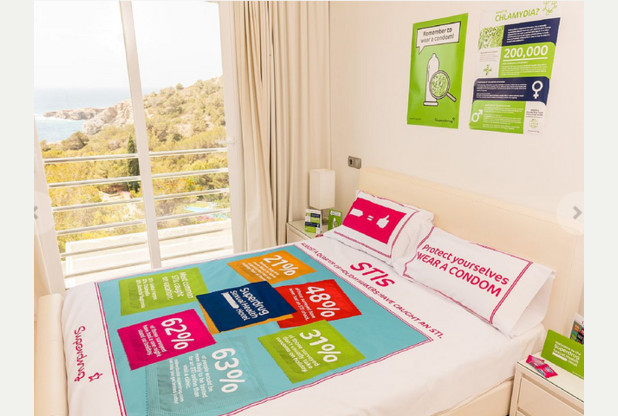 It’s the summer holidays so many of you may be jetting off to different parts of the world either to the Carribean, Asia, Africa or more locally in Europe, possibly Ibiza?

Do you fancy staying in Ibizia, RENT FREE?

Of course you do, who wouldn’t jump at the opportunity, but there’s just one catch. You have to wake up with a few weird facts about the impact of unprotected sex and images of STIs in your face for a few days.

Superdrug has launched a ‘Sexual Health Condom-inium’ in Ibiza with the hope encouraging teens to practice safer sex.

Teens can stay in the apartment totally rent free, but will be reminded to practice safe sex at all times.

Walls bedding and furniture are entirely covered in pictures of viruses and infections and STI facts and figures.

Superdrug have sponsored this new this new health conscious ‘Condom-inium’ with the hope of raising awareness among teens of the risks of unprotected sex on holiday. Research reveals that 1 in 12 18 – 35 year olds have contracted an STI whilst on holiday, with the most common infections being chlamydia and herpes.

During the stay, Superdrug also treats holidaymakers to a ‘safe sex intimacy kit’ which includes condoms and a STI home testing kit, allowing teens to have fun, but reminding them to stay safe at the same time.

The apartment is available for three one-week stays on the following dates:

Would you stay here? Tweet us and let us know yoru thoughts

For more information on the ‘Sexual Health Condom-inium’ or to book your stay, visit the website here.