Young Lewisham: We can relate!

An event to raise awareness around domestic violence in teenage relationships will launch Valentine’s Day in Lewisham, South London.

“We Can Relate” hosted by Deal With DV, will explore different types of relationships young people experience, such as those with family, friends and intimate partners, as well as work with young people to identify what makes a relationship healthy.

The youth owned and youth led enterprise Deal with DV is dedicated to raising awareness of domestic violence among young people aged 13 – 19. In the past they have worked with young people to run campaigns and workshops around DV. 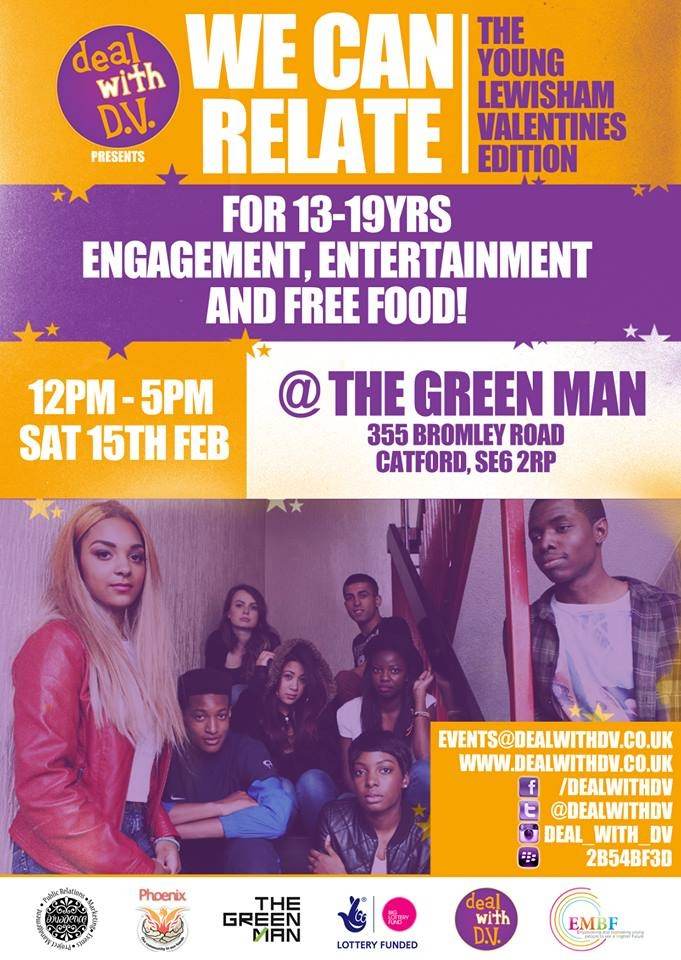 For many young people, Valentine’s Day is filled with love. This is where partners, predominantly men, shower their other half with chocolates, flowers and cards to show their affection and appreciation for a beautiful relationship.

Yet for others, this can be the complete opposite, as an unhealthy relationship can result in fear, pain and misery.

According to statistics taken from the British Crime Survey, 12% of women and 6% of men aged 16-19 have experienced a form of domestic abuse and violence in the last year.

With the recent rejection of mandatory sex and relationship education – SRE – by the House of Lords, there is a worry that young people will be left uneducated and informed about various aspects of sexuality, as well as the services available to them, their rights and their options.

The amendment which was backed by 142, yet voted down by 209, included topics such as sexual relationships, same-sex relationships, sexual violence, domestic violence and consent as the foundations of SRE.

Domestic violence is one of the greatest criminal problems in the UK, accounting for a quarter of all violent crime.

Crime statistics and research show that domestic violence is gender specific – i.e. predominantly experienced by women and perpetrated by men. In reality, 1 in 4 women experience domestic violence at some time in their lives, regardless of race, ethnicity or religion, class, sexuality, mental or physical ability or lifestyle.

• Over half of young women aged 18-21 reported experiencing at least one abusive incident from a boyfriend, husband or partner in a 2009.

• 2009 research by Bristol University and the NSPCC showed that 27% of teenage girls aged 13-17 had experienced sexual violence in their relationships.

• A 2005 NSPCC and Sugar magazine survey showed that 40% of teenage girls would consider giving their boyfriend another chance if he hit them, and one third said that cheating justified the use of violence.

Leanne Higgins, owner and founder or Deal with DV Says:

“The event will be a fun filled day for young people to look and consider what a relationship really is.”

“Domestic violence is an important issue among young people. Abuse is happening a lot within teenage relationships, so much to the point that young people think it’s normally to be mistreated. “

“We want to raise awareness of DV in a youthful environment where young people feel that there are listened to, respects and valued.”

The event will be held at The Green Man, 355 Bromley Road, Catford SE6 2RP.

For more information, log on to Deal with DV via to www.dealwithdv.co.uk