He texted, so what do I do now? 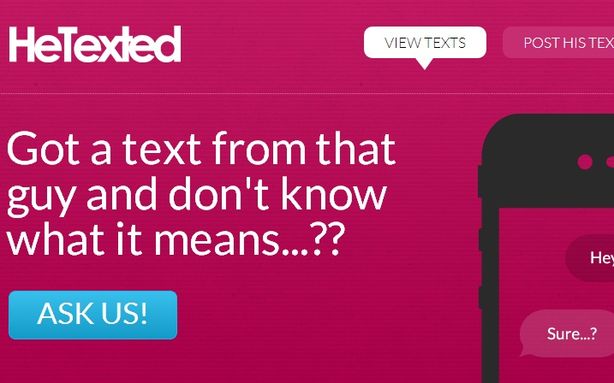 What to find out what a text means ? [hextexted]

It’s a Friday night and you’ve partially made plans to go out with that hottie you’ve been texting all week, but still you’re still skeptical.

On top of that, you’re worried that you’ve been reading the signals all wrong.

So as usual you’ve been asking class mates and older siblings for advice on what his text’s really mean, but unfortunately you still haven’t come to a useful conclusion.

Does he actually likes you in that way? Is the date really a date? Or Is it just a meeting between friends? 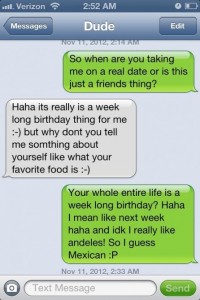 Messages yet to be analysed by The Bro’s at Hetexted.com [flickr]

The interactive site that allows women to upload text and social media messages they receive from males, ask for advice on the message and gain feedback from site users who can vote ‘he’s into you’, ‘he’s not into you’ or ‘the verdict is still out’, as a result of analysing the message.

A lot of the messages are cloaked in obvious ‘he’s into you’ signs: ‘I really liked spending time with you, maybe we should do it again?’ whilst some are still pretty uncertain so ‘the verdict is still out’: ‘Hey lets go out for lunch babe’.

The whole texting situation seems a lot like a modernised English language lesson, where grammar and punctuation have a hidden meaning.

The site also has a private ‘Ask a Bro’ section, which allows users to send messages privately to so called ‘experts’ who’ve heard, seen and sent all the typical text’s women drive themselves crazy over, however they don’t just deal with messages, but dilemma’s and dating questions also.

There is talk of a Shetexted.com which aims to do the same for men, but whether or not it will take off as Hextexted has is a separate issue.

But lets be real, if really want to find out what someone means just ask!