As a result of being awarded The Youth in Action Funding from Starbuck, Shine ALOUD were able to deliver sexual health workshops to the residents of Focus E15.

It was a great experience to deliver these workshops around sexual health and relationships with the young people living in the hostel, it allowed us as well as them the opportunity to voice their ideas and concerns, consider values and attitudes in addition to developing sexual health awareness and team building skills.

We hope to run many more peer led delivery sessions across the borough in the near future.

Recognise before you realise event 2009 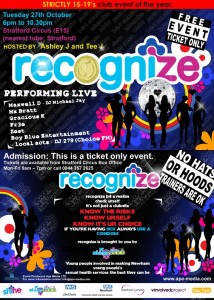 The night featured performances from local acts ranging from dancers to models, DJ’s , singers and MC’s.

The event was a mix of entertainment and education with the aim to raise sexual health awareness amongst young people in the borough .

Thankfully the event attracted over 300 young people and was supported by the likes of Ape Media, You Test, The Terrence Higgins Trust, Choice FM and of course Shine NHS.

This was the first residential that the Shine ALOUD youth group went on to Fair Play house.

We were we given the chance to participate in a range of team building exercises throughout the weekend as well as sexual health education tutorials around contraception, sexuality and sex and law.

Thankfully on this occasion we were funded by the Youth Opportunity Fund from Newham Council and V, we hope to embark on another residential in the near future were we can continue to strengthen our team as well as recruit new members.