The East London musician Bruts has released the official video for his long awaited single ‘Trapped’ taken from the ‘Trapped EP’.

The video illustrates the realities of domestic abuse, as a result of substance misuse, an epidemic that affects 1 in 4 women within their life time.

Despite Bruts taking a 12 month break from the scene to perfect his craft, he assures his listeners that he is back to give them an ‘optimum…flawless…impressive’ listening experience.

All of which are a result of a ‘year of careful beat selection, near endless studio sessions, and numerous occasions of re writing’ his lyrics.

Bruts told Shine ALOUD: Before the break I was constantly conforming or trying to sound like the guy that everybody liked, from my flow all the way down to subject matters. 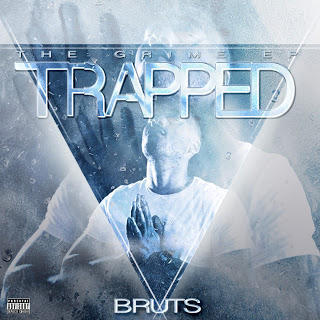 Get your copy of Brutal’s latest EP now

‘The break allowed me to find myself and be confident enough to bring the real me into my music.

‘Looking at the industry from a business point of view, I can’t really fault the direction it’s heading in.

‘There’s opportunity for individuals other than artist to be a part of it and make money.

‘However I think the transition from what it was to what it is now or what it’s trying to be, is happening a bit fast or there’s not the right people leading it.

‘As an artist, I find these managers, PR’s, pluggers and what not (the middle men) sometimes are counterproductive.

‘There are a lot of people putting unnecessary prices and processes on things which can make it difficult for an up and coming to get the exposure and support they deserve.

‘Artist like myself who don’t have a manager or mentor are made to deal with matters that an artist shouldn’t have to deal with.

‘The whole thought process we are forced to adapt takes away vital energy that is needed for what’s really important; the music.

Performing to the crowd at Rich Mix

Bruts also hosting a launch party for the EP at Rich Mix, East London in March, where he received an amazing turnout, in addition to being filmed by GRM Daily.

Performances on the night included the likes of Ghetts, Mercston and Paigey Cakey in addition to a 45 minute set from Bruts himself where he performed alongside the Urban Rocka live band.

In the past, Bruts has also had the opportunity to work amongst some of the music industries most established artists such as Wretch 32, Wiley, Talay Riley and Chipmunk, all of whom originally came from the 90’s UK Grime scene where Bruts began his musical journey at the tender age of 15.

Trapped is now available from all music outlets such as iTunes, Amazon, Play.com and HMV.