If you think using a condom disrupts sex or makes sex less pleasurable, you really don’t know how lucky you really are to be born in these modern times.

Before condoms were perfected as effective, comfortable and unobtrusive means of protection, people were using all kinds of odd stuff to prevent pregnancy.

Here the team from NHS-approved condoms specialists, Freedoms Shop, run through 11 of the most unusual and disgusting things which have been used instead of a condoms – we thank our lucky stars that modern condoms have been invented.

But before we get into the weird and wonderful inventions, have a look at this video created by EngenderHealth , a non profit health organisation specifically for women who specailise in providing access to contraception to women who need it around the world, which features a few of these unusual contraceptive methods and more.

Perhaps the earliest version of the modern condom. Pig’s Intestines were once wrapped around the penis to prevent sperm entering the womb. this method contraception dates back to 1642. Clearly this method is not as effective, clean or safe to use as modern latex condoms, pig offal is also a bit of an acquired taste – not great for getting the majority of people in the mood.

Although a silk condom sounds like it might be quite soft and sensual, it was dogged by more than a few problems. Firstly, fine silk was quite prone to splitting so the entire condom would be ineffective. Plus, the silk would have to be tied at the base with a ribbon to try and stop it from falling out mid-sex. 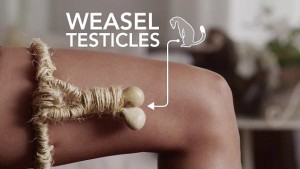 Rather than wearing animal parts around the penis or over the cervix – medieval women believed that merely tying weasel testicles around their thigh would offer sufficient protection. It was thought the presence of tiny, furry balls would ward off baby spirits.

Just a little drop of onion juice on the tip of the penis would help prevent pregnancy believed the Ancient Egyptians. It didn’t really do anything.

Croc poop was once inserted into the vagina mixed with, honey and sodium carbonate. This was method once used by the Ancient Egyptians to protect women from falling pregnant by stopping sperm in their tracks. Collecting dung from crocodile-infested waters is not many people’s idea of good foreplay.

Placed inside the vagina over the cervix like a modern-day cervical cap – the acidity of lemons were effective in killing the sperm. Unfortunately this benefit was slightly offset by the damage the lemons caused to the vaginas of many women who used them.

Looking to pimp their contraception, golden cervical caps were popular with the rich and the famous of the past. However, their glamorous caps were found to lead to infections and Toxic Shock Syndrome – a potentially life-threatening affliction that can be caused by having a tampon in the vagina for too long.

An early relative of the modern contraceptive pill – blacksmith water was drunk by Ancient Greek women to prevent pregnancy. This hyper-effective method of contraception traditionally led to the onset of seizures, comas and death. 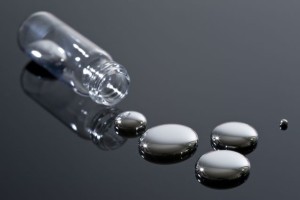 A cocktail of lead and mercury…

Not to be outdone by the ancient Greeks, Chinese women developed a cocktail of lead and mercury to drink in order to terminate pregnancy. Again this primarily worked by killing the drinker of the cocktail, or plunging them into comas.

Not as dangerous as the blacksmith water and mercury tea, 16th century Canadian women got off lightly when drinking their contraceptive tea made from the testicles of beavers. The only downside to this method was that it didn’t work at all and was probably pretty disgusting.

The respected 1st century Greek physician and hilariously named, Soranus, developed perhaps the most insane form of contraception. His female patients were instructed to jump backwards seven times after sex to reduce the chance of pregnancy. Obviously this did not work.

So there you have it, 11 of the most unusual forms of contraception.

Tweet us and let us know about any other ancient methods that we haven’t mentioned.